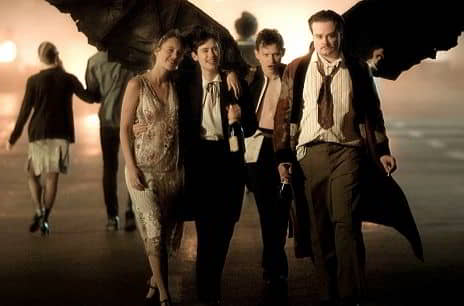 The first reviews of the German series “El Dorado Kadewe” are now available.

The series (Degeto, RBB / Constantin Television, UFA Fiction) tells the story of a “luxury department store” in Berlin in the 1920s, a pulsating metropolis, a “city of women”.

The Weimar Republic promises years of hunger, inflation, radicalisation of the street, anti-Semitism, expropriation, exile…. A difficult time in history for the young protagonists of the serial.

The description of history and the exceptional aesthetic production stand out. It is a journey into the utopia of love, longing and hope: a search for happiness that is not without risk.  In this project, according to the critics, the focus is not only on the reproduction of a decade to determine the narrative, the characters are the core, four young people who dance on a volcano and who do not want to make their love and their search for happiness depend solely on social circumstances.

Everything in this miniseries, in which there is a palpable attitude, above all, an effort for truthfulness, is also aesthetically correct.  In this it differs from many other large-scale television projects. The joint effort of two production companies resulted in the best German series in a long time. In this six-episode project, cinematic aesthetics and an intelligent subjective female gaze meet the urgency of modern serial storytelling.

We are proud to have been part of this project and send our congratulations to costume designer Maxi Munzert who has succeeded in creating a critically acclaimed 1920s Berlin costume.