Home / News / Costume designer Valerie Adda gives us some details of the costumes for the series “Les Combattantes”. 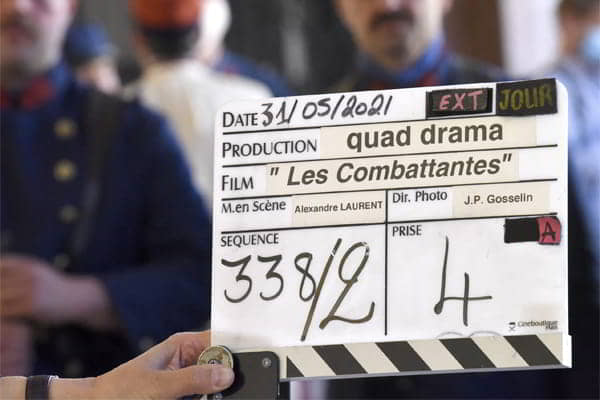 A series co-produced by Quad Drama and France Television TF1, shot in June , 2021 set during the First World War. The story of four women who see their destiny turned upside down… and their place in the society of the time questioned during this turbulent period.

A crew of 150 people was mobilised around director Alexandre LAURENT, acclaimed for his work on the series “Le bazar de la charité”, one of his best-known works. The Great War is faithfully portrayed through the incredible sets and the numerous costumes and uniforms necessary for this immersion in the early years of the 20th century.

More than 1,380 costumes and 600 uniforms dress the numerous actors and extras who bring this eminently romantic story to life, designed by the costume designer Valerie Adda.

An interesting project in which we were lucky enough to participate. The richness of the details and the quality of the costumes, from the hats, jewelry, lace, shoes with spool heels and boots, accompanied by umbrellas, feathered hats and veils, encourage us to put the costume designer in the spotlight: Valérie Adda has gone to great lengths to bring these heroines to life, immersing herself in detail in the costumes of the character Marguerite, the Parisian prostitute who comes to the front, to Caroline, the wife who becomes the director of a company, to Suzanne, the nurse who carries a heavy secret, and finally to Agnès, the mother superior of the convent-turned-military hospital.