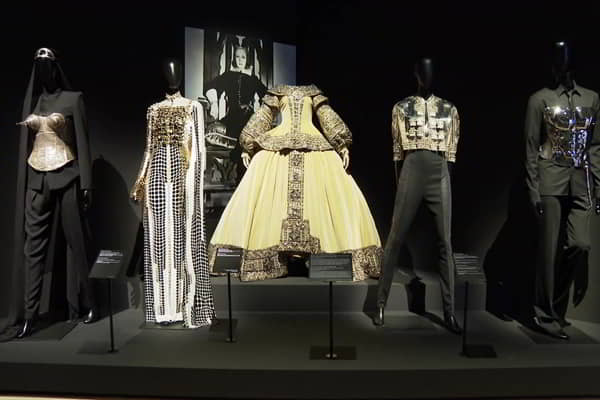 The prestigious French designer Jean Paul Gaultier has curated an exhibition with more than 250 pieces that explores the relationships and influences between fashion and cinema. This exhibition will be at CaixaForum in Madrid from 18 February to 5 June.

Initially, the exhibition was to be a chronological retrospective on the history of fashion through the collection of the Cinémathèque Française in Paris, created thanks to donations made to one of its founders, Henri Langlois, as well as works donated by more than 20 national and international donors. But it gradually became a crossover exploration between Gaultier’s cinema and fashion.

It explores concepts such as the evolution of the links between men and women, female emancipation, modernity in dress, gender transitions in cinema, eroticism and power roles. It incorporates garments used in the films, posters, photographs and excerpts from legendary films.

We are proud to have been part of this project and one of our pieces will be exhibited in the touring exhibition.

We would like to thank Esperanza Claver and Lavinia Mayer from Caixa Forum for counting on us for this project.  We would also like to thank Carmen Lucini and her team for their commitment and dedication to make each piece shine in this exhibition.

We leave you a short video of the exhibition that will be in Madrid until June.