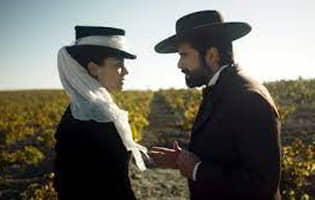 The series La Templanza, a romantic drama that combines the story of wine and love.

Produced by Boomerang Group and based on the novel by María Dueñas.

Starring Leonor Waitling and Rafael Novoa in a captivating story of overcoming and second chances in the 19th century.

The plot will take us through London, Mexico, Cuba and Jerez, the series has a wonderful period setting .

For this series Peris has made more than 85 dresses and rented 500 pieces of the  stock.