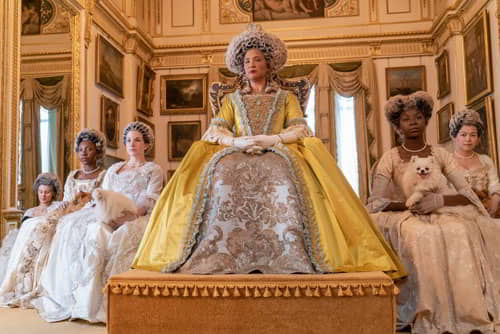 The Netflix platform has premiered at Christmas the Bridgerton series, a period drama set in Regency England in 1813.

A production in which Netflix has worked with the producer of Shonda Rhimes.

The costume design was done by Ellen Mirojnick who worked with a costume team of 238.  Peris Costumes has had the great luck to provide costumes from our stock to the series and to make some of the costume pieces as well.

For the designer the challenge was not only the story, in only eight episodes she needed to create costumes for ten parties that required dresses, tiaras and tails 1813 style.

The female characters needed many costume changes. The women did not repeat dresses at any of the parties.

They had a large wardrobe team that managed the 7500 costumes that also included the costumes of the protagonists.

Fashion in Bridgerton is an interpretation of what people would have worn at the time, but with a contemporary update.