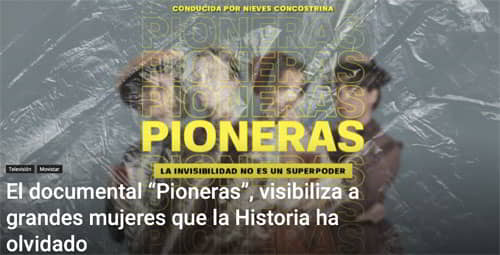 Pioneers, the documentary that gives visibility to the historic women who contributed to the progress of today’s society. Women who overcame the barriers of the era in which they lived.

The production has 4 episodes, directed by the journalist Nieves Conconstrina. It will travel into the lives of these women who history has forgotten.

Luisa Ignacia Roldán: Born in 1706, she was the first Spanish sculptor registered. She worked as a chamber sculptor for the monarchs Charles II and Philip V until his death.

Dolors Aleu: The first woman in Spain with a degree in medicine and the first doctor to achieve the title of doctor

María de Castilla: she is one of the most important and, at the same time, most forgotten characters in Spanish history. She endured, alone, the full weight of the Crown of Aragon and laid the definitive foundations for its union with the thriving Castile.

Through these stories we will also get to know other women who have influenced the fields of science, politics, the arts and sport.