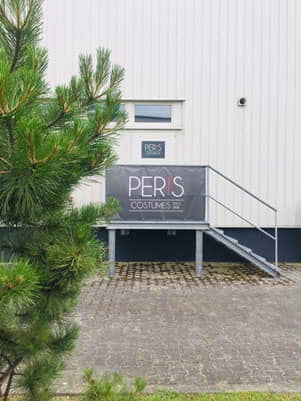 The new headquarters of Peris Costumes in Prague is located in the area near the International Airport, Václav Havel, ten minutes from the city center.

Peris has selected this new location because it is one of the cities where more productions are shot per year. Several famous films were shot in this city, for example, Casino Royale . or Amadeus

Prague is chosen by many companies as a film set because of its medieval essence that can be breathed in every corner. Stone floors and walls abound between spectacular buildings. The meticulously maintained streets offer buildings of all different colors but cut by the same pattern. The mighty Vltava River divides the Czech capital into two halves. The Charles Bridge, the oldest in the city, follows the canons of medieval Czech architecture, the dark stone and gold details, the stone floor and dozens of figures on the sides, flanked by a tower at each end.

The headquarters in Prague has offices and a warehouse with a total of 4551 square meters where you can find costumes from all periods.

As in all our warehouses, an RFID garment recognition system has been installed to control and manage the entry and exit of garments. This system is a great help for the productions especially at the time of the returns.