Home / News / Death on the Nile premieres Teaser and Poster 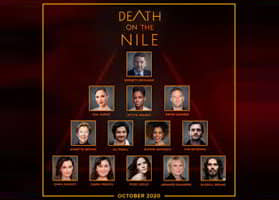 The film “Death on the Nile” has a new poster and trailer. We do not have a confirmed release date for the film in Spain, but in the United States it is expected to reach theaters on October 23rd of this complicated 2020.

The vacation in Egypt of the famous detective Poirot will be interrupted by a murder aboard a majestic cruise.

This is the third film adaptation of Christie’s novel, after the 1978 film; a sequel to Murder on the Orient Express, from 2017, and stars K. Branagh, who returns as H. Poirot

The plot follows Poirot, a world-renowned detective, who becomes involved in a love triangle that turns to murder as he travels through Egypt.

The principal photography began in September 2019, and filming took place at Longcross Studios in England, and Egypt ending in December of the same year.

The cast is full of great actors such as Gal Gadot, Annette Bening and Letitia Wright who together with K Branagh will make us enjoy some very successful landscapes and photography.